India is facing a housing shortage which is currently estimated at more than twenty five million homes in the country out of which EWS (economically weaker sections) and LIG (lower income groups) account for 95 percent. In 2015 the Indian government launched the Housing for All mission with an aim to provide affordable housing to urban poor. It is proposed to build twenty million houses for the urban poor by the year 2022. To achieve this goal the government and private real estate developers have to launch large scale affordable housing projects all over the country. However the construction industry is facing issues with manpower shortage and rising cost of construction materials. The cost of labor has gone up significantly and availability of construction workers has become problematic. Furthermore the pressure on developers has increased as customers are demanding on time delivery of their homes and good quality construction work. Conventional construction methods will not be able to exploit the advantages of mass housing and in the current scenario it is evident that new construction technologies should be utilized to deliver homes fast with minim labor and zero wastage of materials. Especially in Europe after the Second World War the housing shortage was solved by implementing new technologies like precast concrete construction. Precast concrete construction is a building method where building components are prefabricated off site on an assembly line using advanced tools and equipment and thereafter transported to the building site where they are erected using building cranes. Precast concrete construction has evolved over the past five decades towards a flexible building technology which is used in many infrastructure projects and building projects throughout the world. This article describes the technical details and specifications of three different housing projects in India which are being constructed with precast concrete technology. The first project is an affordable group housing project with medium rise apartment towers located in Ghaziabad, Uttar Pradesh. The second project is also an affordable group housing project with medium rise apartment towers but located in Bangalore, Karnataka. The third project is consisting of low rise villas located in Greater Noida, Uttar Pradesh.

This first project is located in Ghaziabad at the outskirts of Delhi where the real estate prices are at an affordable level. The project is being developed on 60 acres of land by real estate developer BCC Infrastructure Pvt. Ltd and the first phase of the project which was launched in 2011 comprised of almost 1800 apartments of 1BHK, 2BHK, 3BHK and 4BHK. Phase one was constructed using conventional cast in place reinforced concrete structures with apartment towers of ground plus fourteen floors. Although achieving an affordable costing the real estate developer was not satisfied with the speed and quality of construction. A technical feasibility study was prepared for phase two of the project to investigate the possibilities of constructing the remaining 39 apartment towers with precast technology. The purpose of the study was to present objective information regarding several precast systems and prepare a comparison between the advantages and disadvantages of the systems. Based on the performed investigation and research it was concluded that a large precast panel system would be the most suitable with respect to structural safety, economics, aesthetics and constructability.

In this project the foundations and basement structure are made entirely as conventional cast in-situ reinforced concrete structure. The basement areas below the towers are utilized for car parking while the driveways are situated in the extended basement areas. The apartment towers which come on top of the basement are made in load bearing precast concrete with the use of large precast elements like slabs and walls. The precast walls are considered to be shear walls and are part of the lateral load resisting system and are adequately connected to the floor diaphragm to achieve an earthquake resistant structure. Due to manufacturing and transportation limitations the precast wall panels are made as one storey high elements and will be jointed at floor level (picture 2). The horizontal and vertical connections between the precast walls are established at the building site only.

Adequate buttressing of the external wall panels has been achieved by connecting the internal wall panels to the external wall panels by grouted shear key joints and reinforced wire loop connections. All load bearing elements at the corners of the building have been stiffened by jointing structural elements perpendicular to it (picture 3). The load bearing precast walls are placed on top of each other and are properly connected to each other at floor level and adequately connected to the floor slab with protruding reinforcements. The precast shear wall system is designed to emulate the behavior of cast in-situ concrete construction in terms of stiffness, strength, ductility and energy dissipation. Because of the provisions for car parking the layout of the basement structure is somewhat different from the superstructure and wherever possible the precast load bearing shear walls of the superstructure are supported by cast in-situ RCC walls at basement level and only at a few locations the precast walls are supported on short span transfer beams. 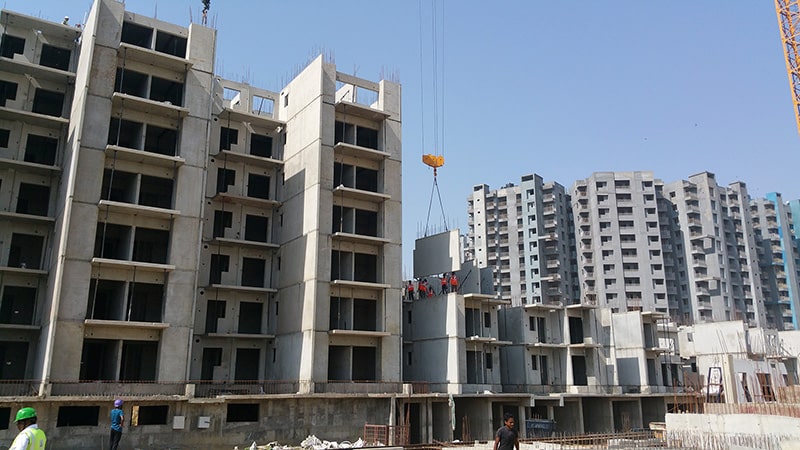 The precast buildings have been designed with proper structural integrity to avoid situations where damage to small areas of the structure or failure of single elements may lead to collapse of major parts of the structure. This has been achieved by providing effectively continuous peripheral tie reinforcement near the edge of the building perimeter. Furthermore internal tie reinforcement has been provided at each floor and roof level in two directions at right angles. The peripheral and internal tie reinforcement has been placed as extra reinforcement inside the RCC cast in-situ topping. Also all the external load-bearing members such as precast walls have been anchored or tied horizontally into the structure at each floor and roof level by providing uniform reinforcement protruding from top of precast walls and bend down inside the RCC cast in-situ topping (picture 7). Each precast wall carrying vertical load has been tied continuously from the foundation to the roof level. At all horizontal precast joint locations the starter bars haven been placed staggered by using a combination of normal length grout tubes and longer grout tubes in combination with continuous dowel reinforcement running from bottom to top inside the precast wall panels.

The staircases are made of precast solid slab landings at floor level and mid landing level. The flights are made as precast stair elements which are resting on the precast landings and connected by dowel connections (picture 8).

Overview of Precast Components For The Superstructure